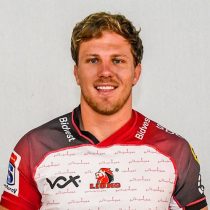 A strong young prop coming out of Hoerskool Dr EG Jansen. Jansen represented Valke in the Craven Week before he signed for the Lions after school.

He made appearances for UJ in the Varsity Cup in 2015.

His Super Rugby debut for the Lions would follow in 2019, making him finish the season with 10 appearances for the side.