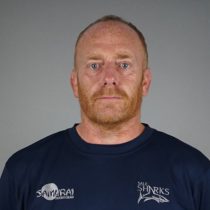 Another Sale Sharks legend who is currently involved in the side's coaching staff.

Pete Anglesea signed for Sale Sharks on January 1st 1999, after playing for Aspull Orrell and Bedford Blues. He was a regular starter for Sharks and played in over 150 first-team games in the back row, at either 6 or 8.

Anglesea’s club highlight is probably his Man of the Match performance in Sale’s Parker Pen European Shield final win over Pontypridd in 2002, which was the first time the club had won a major trophy. He was selected as club captain for the 2003/04 season and was a member of Sale’s Premiership winning squad in 2005-06.

He was, however, forced to retire through injury in 2006 and is now heavily involved in the day-to-day coaching of the Sale Sharks squad, where he assists with the first team. He also coaches the Jets, the reserve side.