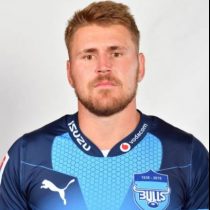 He was included in the senior squad for the 2013 Vodacom Cup, where he scored a try on his debut against the Border Bulldogs.

He made his Currie Cup debut for the Eastern Province Kings against the Blue Bulls in their third match of the 2014 season at Loftus Versfeld.

In 2016 he signed a two-year contract with the Free State Cheetahs prior to the 2016 season.

He made his Super Rugby debut for the Cheetahs in their opening match of 2016 against the Jaguares.

Later in 2016 he starred for the Cheetahs as they went unbeaten on their way to the Currie Cup title.

He made 35 appearances for the Cheetahs in Super Rugby scoring 7 tries and was included in the Cheetahs squad for the 2017/18 Pro 14 season. In May 2018, he signed a one-year deal with the Bulls.

He remained at the Bulls until the end of the 2019 Currie Cup and Super Rugby seasons before signing with Japanese Top League club Honda Heat.