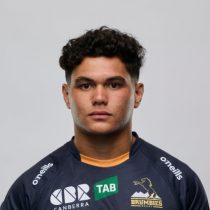 A special talent tipped to reach the pinnacle of rugby in Australia, Noah Lolesio was a schoolboy sensation at inside centre.

The Auckland born playmaker, who is the cousin of former All Black Francis Saili, was educated on the Gold Coast and represented the Australian Schools.

A stand out performer for the Tuggeranong Vikings that won the John I Dent Cup premiership in 2018, Lolesio relocated from the Gold Coast to Canberra just two days after he finished high school last year, moving away from his family to take a chance on rugby.

It paid off after an impressive first season, which caught the eyes of Brumbies coaches and prompted them to earmark him as a star of the future. He signed a deal with the Brumbies and was included in the Canberra Viking 2018 NRC squad.

His form captivated crowds with the Canberra Vikings at NRC level as he helped the side reach the semi finals in his debut season and a final in 2019. He also played a major role in helping the Junior Wallabies to within one score of winning an U20 World Championship with Lolesio starting at centre and inside centre during the competition.

He went on to start the opening Super Rugby game against the Reds in 2020 and retained the starting #10 jumper until the competition was brought to a halt.

The young playmaker is widely tipped to go on and succeed at the highest level with Wallaby great saying that he was a step above most of the kids after visiting one of the Brumbies training sessions.