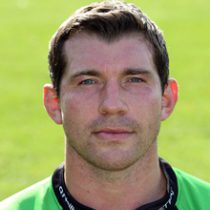 Kennedy forged an exceptional partnership in the second row with Bob Casey during a London Irish career that spanned a decade and 217 appearances.

He moved to Toulon for the 2012/13 season, where he helped the French side win the Heineken Cup, before moving to 2012 Premiership champions Harlequins for the 2013/14 season.

He played in seven Test matches for England and scored on his debut against the Pacific Islanders at Twickenham in November 2008.

After a 13 year playing career, Kennedy announced he would retire at the end of the 2013/14 season and take up a coaching role at London Irish.

The former lock made more than 200 appearances for London Irish’s first team in a decade-long playing career that also included seven England caps and an appearance in the 2009 Premiership final.

Kennedy took up the role of director of rugby in the summer of 2016, having re-joined the club as academy director in 2014 after short spells as a player at Harlequins and Toulon.

In May 2017, after earning promotion back to the Premiership, Kennedy signed a new long-term contract extension with the club.

In March 2018, Kennedy opted to resign and leave the club with immediate effect following a overhaul of their coaching staff.