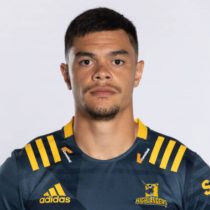 A former Christ’s College first XV captain, Punivai has progressed through the Canterbury and Crusaders development programmes, representing Canterbury Under 19, Junior Knights and Crusaders Knights, and earning national honours as a member of the New Zealand Secondary Schools team back in 2016.

The versatile back was named in the Crusaders side for the Brisbane Tens in 2018 and also represented the New Zealand Under 20s in the Oceania Rugby Championship. Punivai was then called in to the Under 20s Junior World Championship squad, playing in the 3rd/4th playoff.

He earned his first Canterbury cap in the Wanganui Ranfurly Shield challenge back in June 2017, but was named in the Mitre 10 Cup team for the first time this season, featuring in the side’s opening match against Tasman.

He signed with the Crusaders for the 2019 Super Rugby season and made his debut against the Lions.

A big strong ball carrier with a wide range of skills he can play in the centres or on the wing.

“Really excited to be joining the Highlanders and am looking forward to taking the next step in my rugby journey down South. Looking forward to getting stuck in”, were the remarks of the fullback a he noted that he would be switching teams.