The first two rounds of the Six Nations have produced rugby worthy of the tradition and excellence for which the competition is known. We now take a look at the stats so far and highlight the names of those players who have gone above and beyond in their pursuit to be crowned champions of Europe in 2020.

Bernard Le Roux (France), Alun Wyn Jones (Wales) and Justin Tipuric (Wales) have put their bodies on the line in the tackling department in the last fortnight with 38, 37 and 36 respectively. South African-born Le Roux has been a pillar of strength in the French pack while the extraordinary industry of Alun Wyn Jones shows no signs of relenting despite his many years on the pitch. Tipuric has also proved to be a livewire asset to the Welsh with his superb work rate.

In the face of what has been fairly rigid defence thus far, three names stand out when it comes to taking the ball up to the line. Ireland’s Jordan Lamour has made a total of 34 carries, back-row forward Gregory Alldritt (France) follows closely with 33 and James Ryan has completed 28 for the Irish.


In terms of metres gained, Lamour, Italy’s Matteo Minozzi and Antoine Dupont (France) lead the charge with 192, 141 and 135 respectively.

On attack, there have been three stand-out backs. France’s Antoine Dupont and Scotland’s ranging fullback Stuart Hogg have beaten 10 defenders apiece after the two rounds, followed by Nick Tompkins (Wales) with 8.

The names Maro Itoje, CJ Stander and Alun Wyn Jones are regulars in the ‘turnovers won’ column. England’s Itoje has managed 6 turnovers so far, followed by CJ Stander of Ireland with 5 and Alun Wyn Jones appears again with 4. It is testament to the immense efforts of the tight fives so far in the competition that two of the top three names in this section are locks and not loose-forwards. 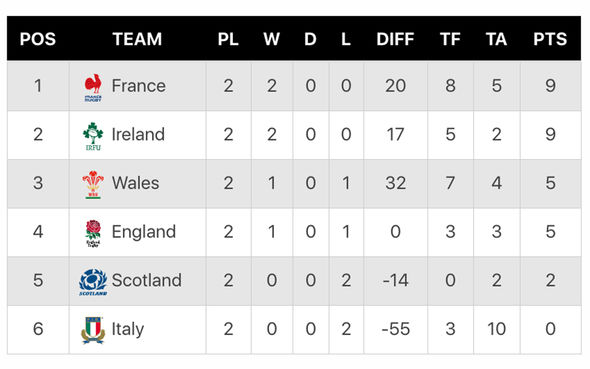 Pace and power have been put to good use by Tomos Williams (Wales), Jordan Lamour and Jacob Stockdale (Ireland) who have all totalled 5 clean breaks.

Nick Topmkins’ prowess on attack is negated somewhat by his defensive capabilities, having slipped 8 tackles thus far (the same number of defenders as he has beaten). England’s captain Owen Farrell has the second highest number of missed tackles at 7, with Luca Morisi (Italy) and Josh Van Der Flier (Ireland) each with 6.

Round 3 promises to be a cracker with the highlight being England taking on the Irish. Italy will host Scotland and Wales square up to France.