As the hugely successful Super Rugby Aotearoa tournament nears conclusion, Round 8’s results have maintained the possibility of an exciting finish and the Blues’ victory over the Highlanders on the weekend puts them just two points behind the table-topping Crusaders with two rounds to play.

The Crusaders exhibited a characteristic late surge to bury the struggling Chiefs 32-19 in Hamilton and will fancy their chances at being crowned competition winners in a fortnight’s time. They will host the Highlanders in Christchurch in Round 9 and, although the men from Dunedin have indeed shown some flashes of brilliance this season, it can be assumed that the Crusaders, with one hand on the trophy already and playing in front of their zealous supporters, will emerge victorious in that spectacle and thus move to 28 or 29 points on the log. 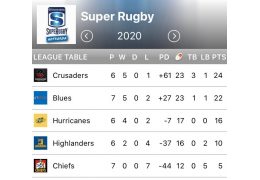 However, at the same time, it has certainly proved to be a foolish move to write off the Highlanders – just ask the Chiefs, who were victims of a truly stunning comeback from Aaron Smith and co. in Round 6.

The Highlanders have thus far banked a total of 10 points from their two victories and have no genuine chance of challenging for the title, but a bit of magic from them this weekend may yield a mouth-watering prospect in the final round. The Hurricanes, currently on 16 points and fresh from a bye in Round 8, will take on the Chiefs at the ‘Cake Tin’ on Saturday. A maximum five points for the ‘Canes will see them ascend to 21 points on the log which will leave them still behind the Blues who have their second and final bye of the tournament in Round 9. However, caution should still be observed in predictions as the Chiefs will have nothing to lose in what will be their final game of the tournament in Round 9 and may just surprise their Wellington foes and post their first (and only) win.

Interestingly, the 'Canes still have a theorectical chance of winning the tournament (albeit as joint-title holders with the Crusaders); should the Crusaders lose to the Highlanders in Round 9 and then draw with the Blues in Round 10 with the 'Canes bagging 10 points from their last two games, it will put them on top of the log with 26 points and level with the Crusaders. On the surface, somewhat unlikely, yet stranger things have happened.

From the betting man's perspective, however, Super Rugby Aotearoa looks set to come down to the traditional and fierce rivalry between the Auckland and Christchurch-based teams. The former will require the Highlanders to pull a fast one over the Crusaders this weekend, thus resulting in the thrilling prospect of having the Crusaders and Blues battle it out for the title in the final round in Auckland when they take each other on.