Head Coach Mike Blair, said: “First and foremost, it’s important to recognise that every player moving on has given their all to the jersey and we wish them the very best in their future rugby careers.

“It’s a really difficult job balancing the squad and the budget. We can’t keep everyone unfortunately and players move on for different reasons. We hope these players leave with fond memories of the club and feel that they have improved and been challenged.

“It’s been an absolute pleasure coaching them and they’ve all shown great commitment to better themselves and the club since day one.

“Their contributions both on and off the field cannot be understated and we wish them all the best for the future.”

Toolis will make the move to a Japanese Top League side following the 2021/22 campaign, his ninth and final season in the Scottish capital.

The lock – who joined the club alongside twin brother, Alex, in 2013 – made his Scotland debut in 2015 and has since gone on to win 26 caps for his country, earning selection for Rugby World Cup 2019 in Japan.

With 127 appearances to his credit, Toolis will depart having already played the second-most ever games in the capital club’s second-row and is only surpassed by current club captain Grant Gilchrist for appearances by an Edinburgh lock [172].

Back-row Bradbury leaves the club at the end of the season to join English Premiership side Bristol Bears.

The Scotland internationalist and Scottish Rugby Academy graduate joined the club in 2014, making his professional debut for the capital side at the age of 19.

A product of Oban Lorne RFC, Bradbury – who has since earned 17 caps for his country – became Edinburgh Rugby’s 36th club centurion in December, marking his 100th appearance with a Player of the Match performance against Benetton.

The abrasive centre represented Scotland at the Rugby World Cup 7s in Moscow that same year before competing in the Glasgow 2014 Commonwealth Games.

A product of Merchiston Castle School, Johnstone played his club rugby at capital-based sides Currie and Watsonians, before making his Edinburgh debut from the bench in the 2015/16 season opening victory over Leinster.

After breaking into the capital XV at the beginning of the 2017/18 season, the centre scored his first try for Edinburgh in the 24-19 1872 Cup securing win over Glasgow later in the campaign, and will be fondly remembered for his breathtaking run and finish in that season’s European away victory against RC Toulon.

Centre and former Scotland age-grade internationalist Taylor announced his retirement from rugby due to health reasons in January.

He made the decision to hang up his boots with his own health and wellbeing paramount in his decision-making process, while taking on a new career in the family business of veterinary pharmaceutical supplies.

The centre made 38 appearances for the capital club – scoring six tries – since making his professional debut against Munster in November 2018.

Moyano joined Edinburgh from French Top14 side RC Toulon ahead of the current campaign.

The Argentine international made his Edinburgh Rugby debut in October 2021, starting on the wing in URC Round 3 fixture against DHL Stormers at DAM Health Stadium.

Moyano suffered a bicep injury in last month’s URC win against Zebre Parma – ruling him out for the remainder of the season – and will leave having notched up 9 tries in 13 appearances.

Chamberlain joined the club following an impressive 2020 U20 Six Nations campaign that saw him start all five matches, scoring 63 points in the process.

He made his debut for the club against Glasgow Warriors in September 2020 and enjoyed a breakout game against Connacht in March 2021, which saw Chamberlain convert his own last-gasp try to secure a dramatic win.

Chamberlain is currently playing in the FOSROC Super6 with the Southern Knights.

The loosehead prop made his Edinburgh Rugby debut in the home win against Cardiff Rugby in November 2020 and has since made five appearances for the capital club.

Grahamslaw gained Scotland U20 honours in 2017/18 and went to the World U20 Championships in France, playing in all five games. 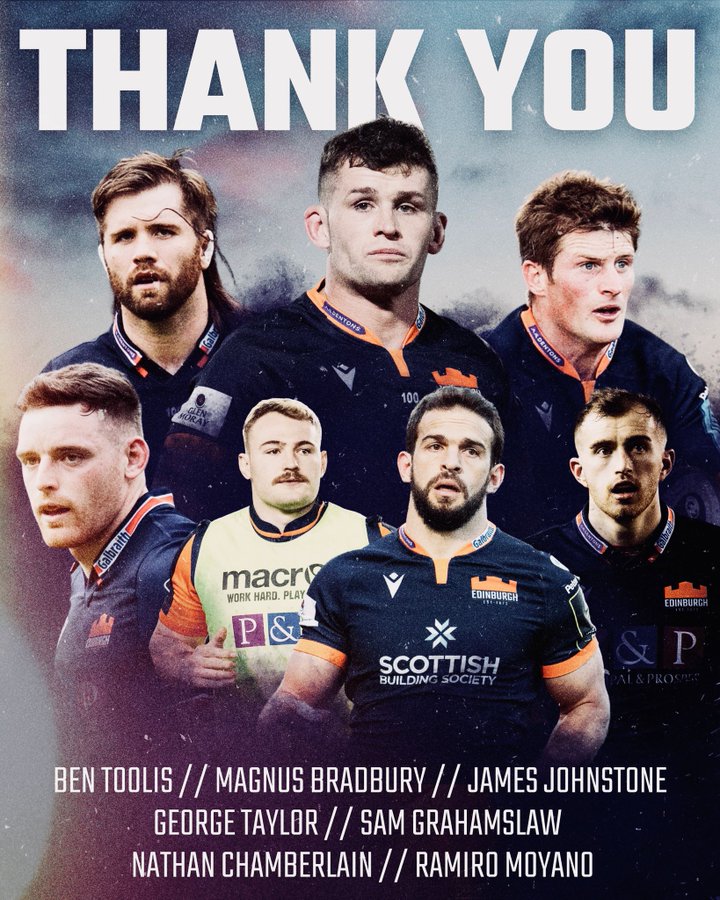