Dempsey returns for clash with Blues

The NSW Waratahs have named their team to face the Blues in round 2 of the Harvey Norman Super Rugby Trans-Tasman competition.

NSW Waratahs Co-Coaches Chris Whitaker and Jason Gilmore have made one change to the starting XV that took the field against the Hurricanes, while adding two new faces to the bench.

James Turner, the 2020 Shute Shield leading try scorer will make his NSW Waratahs debut on the wing. Turner arrived at the Waratahs last week after some impressive performances for Northern Suburbs in the Shute Shield and slots straight into the back-three alongside Jack Maddocks and Alex Newsome.

Waratahs Co-coach Jason Gilmore said Turner’s selection was a sign that strong performers in the Shute Shield are noticed and rewarded.

“James has been outstanding in the Shute Shield this season for Norths and deserves his selection,” Gilmore said.

“We brought him into the squad last week and he has been just as impressive on the training field. We’ve got a lot of faith in him and are excited to see what he can do in Super Rugby”.

The Waratahs have named the same forward pack that took on the Hurricanes last weekend.

Angus Bell, Dave Porecki and Harry Johnson-Holmes make up the front-row. Bell, fresh off re-signing with the Waratahs last week, had a huge game against the Hurricanes scoring a try and making 17 carries and 7 tackles.

Charlie Gamble retains his place in the backrow alongside Lachlan Swinton and Will Harris.

The Waratahs Co-Coaches have gone with a six-two split on the bench looking for plenty of impact from their forwards late in the game.

In a huge boost for the side, Wallaby Jack Dempsey returns for the first time since injuring his foot against the Rebels back in Round 5.

Gilmore was thrilled to have the dynamic Wallaby backrower back in the side.

“Demmo is a great ball carrier and it’s great to have an experienced senior player back in the squad,” Gilmore said.

“He adds another dimension to our pack and we’re looking for a real impact from him off the bench late in the game”.

Jack Whetton makes his way to the side via the bench and returns to the familiar surroundings of Eden Park where he played for Auckland in the ITM Cup.
No. 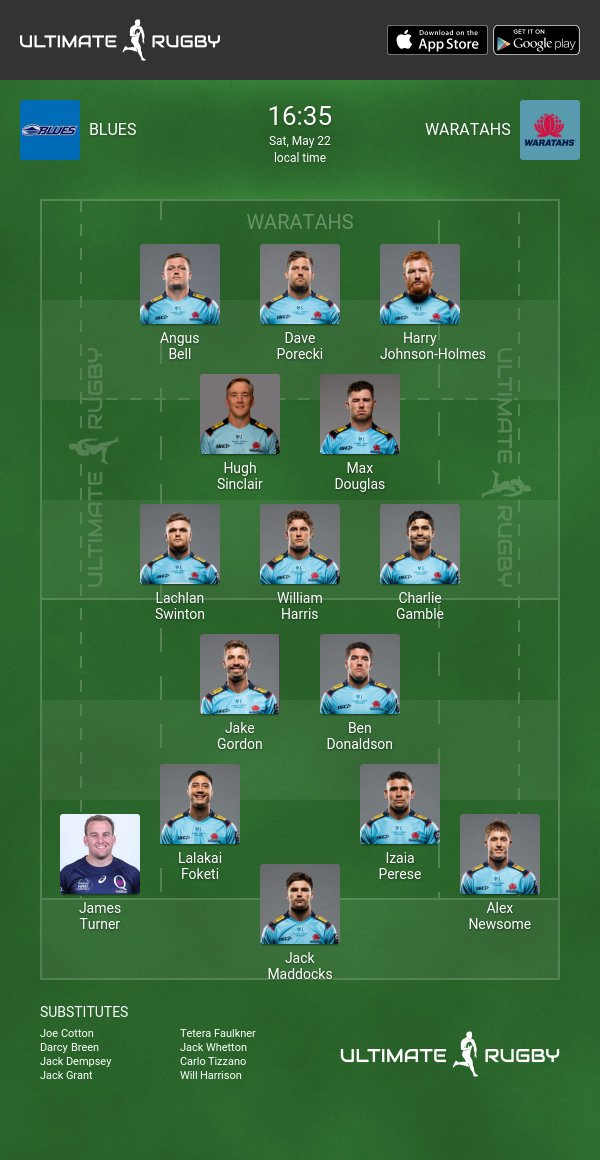