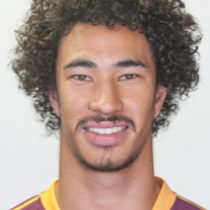 Namibian-born and South African educated Michal Haznar got his first taste of Varsity Cup Rugby in 2014 when he represented UJ.

Haznar has made a name for himself in Varsity come as he is known as a strong ball carrying centre, who defends well and finds gaps in the oppositions defence.

Haznar attended Paul Roos Gimnasium and returned to Stellenbosch in 2015, when he swapped universities. He has continued to perform for the Maties as the marched their way to another Varsity Cup final in 2017.