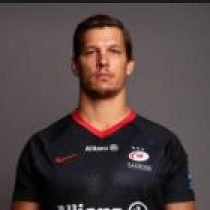 Rhodes was born and bred in Durban, having schooled at Michaelhouse and played junior rugby at the Sharks and then the Lions before moving to Cape Town in 2013.

In 2015, Rhodes linked up with Saracens and had an impressive first season with the side, he signed a three-year contract in the summer to remain at Saracens until 2019.

Since arriving at Allianz Park in the summer of 2015, Rhodes has quickly become a fan favourite, establishing himself as a tough-tackling and durable back-rower and making over 50 appearances for the club.

A tough-tackling and durable back-rower, Rhodes made 27 appearances for Saracens in his first season with the club, playing a key role in the historic double.

Rhodes has also had the opportunity to play for the legendary invitational side the Barbarians in their 2014 match against Leicester Tigers at Welford Road, as well as facing the British and Irish Lions in their 2009 tour of South Africa.

He is eligible to play for England in July 2018 after completing his three-year residency qualification. In November 2018 he was included in England's squad ahead of the November Internationals.

Rhodes signed a new one-year deal at Saracens in July 2020 committing to the club for another season. A popular figure within the squad and with supporters, Rhodes is just seven games away from joining the Saracens 100 Club.

Saracens Players’ Player of the Season 16/17