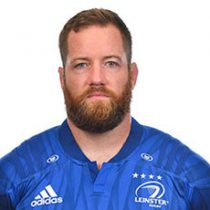 Bent arrived at Leinster with a wealth of New Zealand club rugby experience, with Taranaki, and two seasons of Super Rugby under his belt.

The Irish qualified front-rower can play at either tight or loosehead prop and built a reputation as a fearsome scrummager having come up through the age grades at Taranaki.

In November 2012, Michael was called up to the Ireland squad for the first time and made his international debut in the Guinness Series game against South Africa & Argentina in the November series.

He earned two more caps in the 2015 World Cup warm-up games against Wales and Scotland.

Bent has seen his game time limited in recent seasons due to the emergence of Tadhg Furlong as Leinster's starting tight-head. But the New-Zealand born Ireland international hasn't given up on his chances of being recalled to Joe Schmidt's side.

He went into the 2019 Champions Cup with 24 appearances at the tournament.

Following 155 Leinster appearances and 4 Ireland caps, Bent announced that he would retire from professional rugby at the end of the 2020/21 season.