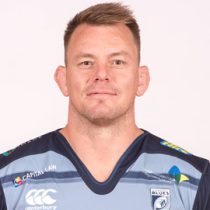 Long admired as one of the Northern Hemisphere’s most consistent hookers, Rees began his career with Pontypridd RFC. Debuting for The Scarlets in 2004 and it wasn’t long before his form earned him a Welsh senior cap.

Rees made his debut for Wales against the USA in 2005 and has gone on to win over 50 caps and been Wales captain. He was also selected for the Lions tour to South Africa in 2009, playing in all three Test matches, and started alongside fellow Welsh front-row internationals Gethin Jenkins and Adam Jones in the Second Test.

Rees was named in Wales’ 2010 Six Nations squad and, later in 2010, was named Welsh captain in place of the injured Ryan Jones for as Wales took on Australia in an Autumn international. Rees had the honour of retaining the Welsh captaincy for Wales’ 2011 Six Nations campaign. Unfortunately for Rees, he would miss the World Cup later that year through injury.

Rees joined the Cardiff Blues and was named regional captain in 2013 after his switch from the Scarlets, where he made over 170 appearances.

Rees equalled the record held by Garin Jenkins for the most Wales caps as hooker in February 2013 against Ireland with 58 caps.

His first season at Blues was interupted by an enforced spell away from the game for medicial treatment. However, the inspirational front row made his return in 2014 and capped his comeback when he was named in the 32-man Wales squad to tour South Africa.

Rhondda Sport Personality of the year 2010