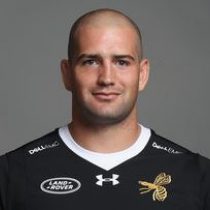 Symons started out in the Saracens youth system before leaving to pursue a career in rowing. He made a return to rugby after an injury ended his rowing career.

In 2011, he started playing professionally for Esher for whom he made 14 appearances.

The 6ft 7in, 18 stone lock is one of a very select group of English players to experience Super Rugby, courtesy of two seasons in New Zealand with the Chiefs, where he became a first team regular and captained the side.

On 25 March 2015, Symons returned to his home nation to sign for London Irish in the Premiership for the 2015-16 season.

Wasps announced to have signed the English-qualified second row, joining the side ahead of the 2017 season.

In May 2018, Symons signed a deal with Harlequins having helped Wasps to the Premiership Final in the 2016–17 season.

He is yet to score a try for his side since joining.