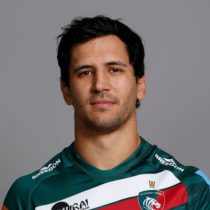 Born in Buenos Aires, Moroni played his junior rugby at Club Universitario de Buenos Aires (CUBA) before being selected in the Argentina Under-20s squad for the Junior Rugby World Cup in 2011.

In 2012, Moroni joined the World Rugby Sevens circuit as part of the Puma 7s squad and represented Argentina at the 2016 Olympics in Rio de Janeiro, Brazil.

Moroni also represented the Pumas sevens team in 13 competitions during 2012 and 2013 and was selected by the Pampas XV for their 2014 tour of Oceania.

He joined the Jaguares Super Rugby team in 2015 and was a regular starter for the side until his departure in 2020.

He made his Test debut in 2014 against Scotland and has made more than 40 appearances for Los Pumas, including two successive Rugby World Cup campaigns in 2015 and 2019.

The entertaining outside-back who features in the midfield too, signed for the Leicester Tigers ahead of the 2020/21 Premiership season.