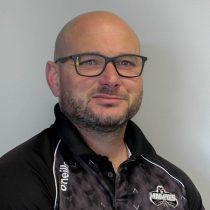 In 2019, Ozich was named as the new Hawke's Bay head coach and by 2020 he helped the side gain promotion to the Mitre 10 Cup Premiership division.