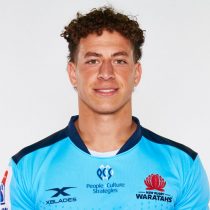 A 190cm flyer that will keep both opposition defences and rugby commentators on their toes in the future. Waratahs young gun Mark Nawaqanitawase announced himself to the rugby world after starring on debut for the Waratahs in their trial win over the Highlanders in 2020 having shined through the age groups in Australia.

Burwood born Nawaqanitawase joined the Junior Wallabies quite late in the fold, with his Fijian Father encouraging him into Rugby, Mark linked up with the NSW Generation Blue program in 2019 and since rapidly climbed the ranks. In May 2019, he was named in the Junior Wallabies squad for the World Rugby U20s Championship.

It’s been a meteoric rise to the brink of Super Rugby for the Burwood-raised Nawaqanitawase.

After missing out on all representative honours during school, Mark was scouted by Gen Blue coach Shannon Fraser, who called the then year 12 student and asked him to come in for a trial with the academy.

Just six months later he was scoring tries for fun on the wing for the Junior Wallabies on their way to the final of the 2019 Under 20s World Cup, and more excellent form for NSW Country in the NRC led to Nawaqanitawase landing his first contract with Waratahs.

He went on to help the side reach the final of the competition where they lost to the Golden generation of France's youth.

The youngster was named in the starting line up of the Waratahs first game of the 2020 Super Rugby season against the defending champions the Crusaders where he made his debut with his overall game being linked to that of Israel Folau.