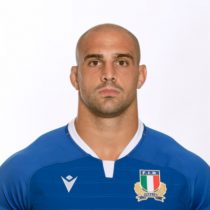 Born in Udine, Lazzaroni played for the local rugby club before moving to Mogliano in 2012 to start his professional career in the Eccellenza Championship (Italian Top Division).

He was one of the key elements in the Italian U 20 Squad at the World Rugby Under-20s Championship in 2014 and 2015. His standout performances in New Zealand and Italy helped the Azzurrini keep their place in the main draw.

His rapid growth and steady development brought him onto the radar of Toulon in the spring of 2014 but, after the involvement of the Italian Rugby Federation, he decided to sign for PRO12 side Benetton Treviso.

At senior level he was part of the group that prepared the 2016 Six Nations campaign under Jacques Brunel and made his debut in Brisbane against Australia.

Lazzaroni is a proven tackler with a strong ball-carrying attitude, his power and lineout abilities make him a very versatile player that can play on either flank or even in the second row, if need be.

After missing out on the RWC squad, he earned a recall ahead of the 2020 Six Nations.