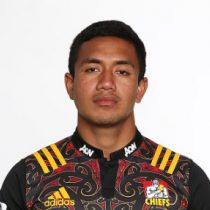 Luteru Lualala is a New Zealand-born utility back and younger brother to All Black prop Nepo Lualala.

Laulala made his ITM Cup in 2014 and made a further 3 appearances for Canterbury that season. In 2014 he represented Samoa in the U20 World Cup and in 2015 he switched his allegiance back to New Zealand for the 2015 edition of the tournament.

Lualala joined Counties Manukau in 2016 and played in all 11 of their Mitre Cup games scoring 3 tries and 4 conversions on the way to the Semi-Finals, where they lost to Canterbury.

In April 2017 he was named in the Provincial Barbarians side to face the Lions in their tour opener in Whangarei on June 3.

Lualala made 2 appearances against the Lions for the Chiefs and the Provincial Barbarians.

He made one appearance for the Chiefs in 2018 before joining Japanese club Shining Arcs.