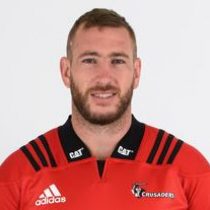 The New Zealand lock left behind a possible career as a builder to join the professional rugby ranks, and hasn't looked back since.

He has Italian heritage through his grandfather, which saw him attract the interest of club sides in Italy in his early playing days.

Schooled at Christchurch Boys High, the big lock made his Super Rugby debut in 2011 against the Bulls.

Playing for the Crusaders in Super Rugby, the powerful second rower regularly churns out impressive displays, showcasing good hands and a powerful and direct running style.

Romano had a whirlwind start to his international career, making his debut in the 60-0 record win over Ireland in 2012, and since then has put in a number of consistent performances in the All Black Jersey.
He has played 32 tests in the All Blacks jersey between 2012-2017, with his last test against Scotland in Murrayfield.

The experienced second rower took his Super Rugby cap tally past the 100 mark during the opening rounds of Super Rugby 2018 and was called into the All Blacks June Test squad as injury cover after missing the initial squad having just come back from an injury himself.

Romano is part of the Canterbury 2020 Super rugby squad,he has obtained 129 caps so far and is the most capped player in the squad.