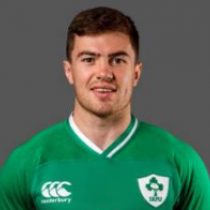 McGrath, with caps at both provincial & national underage levels, catapulted his way in to the Leinster set up, earning a host of Leinster A caps during his time in the Academy.

The scrum half made his first provincial start at senior level in May 2012 & signed his first professional contract in 2014.

The highly rated 9, spent the early days of his professional career biding his time behind formidable competition in Eoin Reddan & Isaac Boss.

McGrath, now considered a leader within the Leinster squad, earned a call up for Ireland to play in the November Internationals in 2016.

He made his Ireland debut against Canada in the November International, and his game has improved considerably since that outing.

McGrath's all- round game has steadily improved this season and is the clear first choice starter for his province.

His progress is sure to of caught the Ireland coaches attention, he punches well above his weight in defense and is rapid off the deck.

McGrath was named in the Ireland squad for the opening two rounds of the 2017 6 Nations. In April 2017, he signed a new contract with Leinster following some excellent form with the club, and was named Players’ Player of the Year at the end of season awards.

He has also captained Leinster on a number of occasions showing the respect with which his peers in Leinster blue hold the former St Michael’s man.

This great provincial form was recognised with an Irish debut against Canada in November and his 6 Nations debut in against England in Aviva Stadium.

In May 2019 he was named in the Ireland RWC Training Squad with 10 caps to his name and added a further 9 caps at the tournament.

McGrath has been named for the 2020 Six Nations Ireland squad with 19 caps.

Bank of Ireland Players’ Player of the Year (2017)