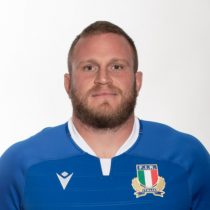 A powerful hooker Luca Bigi was plying his trade with club side Viadana, when he caught the eye of the Benetton Treviso staff and signed with the Pro 12 side in 2015.

Bigi forced his way into the starting lineup and earned his first test call up in 2017.

The Benetton hooker impressed Italy head coach Conor O'Shea, in his first season of test rugby, earning 6 Test caps for his country and earned a spot in Italy's 2018 6 Nations squad.

Bigi was named in the Six Nations squad for 2019, having had 3 previous 6 Nations appearances.

In January 2020 he succeeded Sergio Parisse as Italy captain and lead the Azzurri to the 2020 Six Nations Championship.