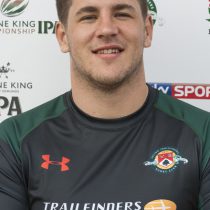 Llewelyn Jones is a versatile back row player, able to slot into the scrum in the second row, flank or number 8. He along with his twin brother Carwyn, made their debut for Ealing Trailfinders in the 2014/15 season. Llewelyn was a member of the Scarlets Academy and made his debut in senior rugby for Llandovery. Jones has carried his fine form throughout the previous 3 seasons with the Trailfinders, scoring 1 in 15 last season, and looks set to continue his development as a player in the coming campaign.