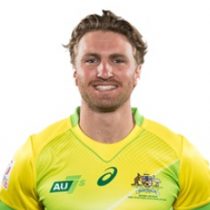 Holland was an impressive rugby player in high school, representing both his state and country in 2010 as a member of the Australian Schoolboys team.

The ball-player made his debut with the Australian Men’s Rugby Sevens team in 2011. The same year he represented Australia at the Commonwealth Youth Games on the Isle of Man, coming home with the bronze medal.

He went on to make his Olympic debut at the 2016 Summer Olympics along with his partner, Charlotte Caslick, who was also contending her maiden Games with the Australian Women’s Rugby Sevens Team.

October 2016 saw Holland being appointed as Club Captain for the Aussie Men’s Sevens program after Ed Jenkins elected to step down.

After making a long-awaited return from injury at the Silicon Valley Sevens, Holland lead the team to their clean sweep victory, and raised the silver wear at the conclusion of the final.

Holland has been named as the Aussie 7s captain for the 2018 Rugby World Cup Sevens.

After the World Series was brought to a halt in 2020, Holland signed with the Rebels ahead of their Super Rugby AU tournament