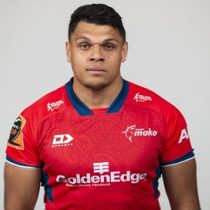 A damaging backline weapon, Aumua’s versatility will provides any team with great options.

Aumua impressive skill set means he can play centre or wing and his big stature poses a threat to opposing defences.

An impressive debut season for Tasman in the 2017 Mitre 10 Cup caught the eye of the Chiefs coaching staff and the youngster signed a Super Rugby contract for the 2018 Super Rugby season.

Aumua made his debut against Canterbury and made 5 other appearances for Tasman as his side made their way to the Premiership final.

Aumua did not feature for the Chiefs in 2018 and after another stellar season with Tasman he signed with the Blues.

He joins the Blues for the 2019 season from Tasman, his combination of speed and size make him a midfield wrecking ball.