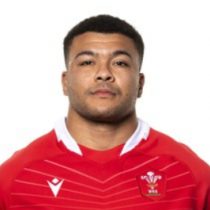 Brown burst onto the scene in 2012 when he played his first match for the Dragons U16s age grade side, after coming on as a replacement against the Ospreys U16s.

The Newport born front row found his feet and became a regular starter for the U16s before moving onto the U18s and his high school Newport High School.

He has made many appearances for Gwent side Cross Keys, whilst also appearing in the semi-final of the Principality Premiership against Ebbw Vale at Eugene Cross Park.

He made his debut for Dragons in 2016 against Leicester Tigers, coming off the bench in the Anglo-Welsh Cup.

In October 2017, Brown was named in Wales' 36-man squad for the November International matches against Australia, Georgia, South Africa and New Zealand.

The youngster signed a new long term contract with the Dragons following his inclusion into the senior set-up.

Brown debuted off the bench against Australia and made further appearances against Georgia and New Zealand to take his Test cap tally to 3 and cap off a fantastic 2017 for the young tighthead.

In March 2021, he signed a new long-term contract with the Dragons.