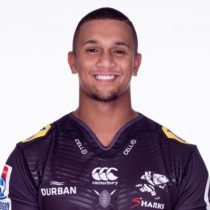 A member of the SA U20 side that finished 3rd in 2015, Zas is extremely quick and punishes defenses when given space. He made his Currie Cup debut in 2015 for Western Province.

Schooled in Hermanus, he represented Boland in Craven Week and SA Schools.

He has scored 40 points in 15 Super Rugby appearances since his debut in 2016.

He failed to make an appearance in the 2017 Super Rugby due to injury and in November 2017, he signed for the Sharks from the start of the 2018 Super Rugby season.