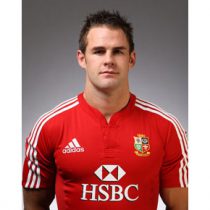 Having started his rugby career playing both Union & League but it was during a League game for Bridgend Blue Bulls that he was spoteed and soon signed for Llanelli Scarlets. A Full Back by choice he is sometimes found on the wing and made 46 appearances for Wales and 1 for the British & Irish Lions in 2009. Having played 92 games for Ospreys he made the move over to France where he spect 3 seasons as Clermont playing 62 times before returning home in 2014 to play for the Newport Gwent Dragons. Sadly injuries were a concern and in April 2015 he announced his retirement from the game at age 34 after a troublesome shoulder injury