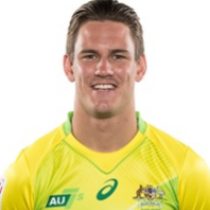 Anderson's switch to the Sevens format came after a highly successful schoolboy Rugby career, representing both NSW and Australian schoolboys. The powerful forward represented Australia in Sevens at the Youth Commonwealth Games in Apia, Samoa in 2015.

Debuting at the Sydney Sevens tournament in 2017, Anderson introduced himself to the world with an electric performance coming off the bench in jersey 12 to impress the coaching staff, to then deservedly earn a full contract signing on until 2018 after accumulating a total of eighteen tries throughout the remainder of the 2017 World Series.

Lachie continued to shine in the eight matches in Mackay against Japan and Queensland sides before continuing through with the squad into the Silicon Valley Sevens in November, where he was a crucial member of the team that won the nail-biting final 15-12 against the hometown USA side. This was the Aussie Sevens side third consecutive title in the lead up to the 2017/2018 Sevens World Series.

Anderson was named in the Aussie 7s squad for the 2018 Rugby World Cup Sevens. After the World Series was brought to a halt in 2020, Anderson signed with the Rebels ahead of their Super Rugby AU tournament