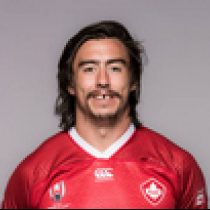 London Scottish have announced the arrival of Canadian international Kyle Baillie for the 2017/18 season.

The second-row/flanker trialled with Saracens back in January 2017 after impressing their selectors in Canadian colours during the November tests. However after dislocating his shoulder on the field in Saracens colours in the LV Cup he missed the opportunity to pick up a long-term contract.

A standout performer for Canada in 2016, his performances during the November and June tests saw Kyle nominated for the Canada player of the year, eventually losing out to another ex London Scottish player and current Newcastle Falcon, Evan Olmstead.

The 26-year-old who has eight caps for his country is known for his high work rate in defence and willingness to carry the ball at pace. A natural at both lock and blindside, Kyle is a threat at the set piece, offering himself as an option at line-out time and a powerful scrummager.

Kyle spent the 2015 season with the Eastern Suburbs Rugby club in Sydney, before a move to join Ohio in the newly formed US PRO Rugby competition saw Kyle excel at lock, scoring two tries in six starts for the club.

He is also an experienced performer for Canada A, featuring in the Americas Rugby Championship, Pacific Nations Cup and Americas Pacific Challenge.