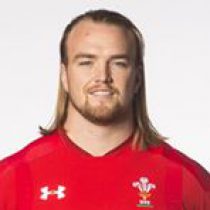 In the 2007/08 season, Kristian was playing for Merthyr in Division One, and for the Blues U20 team. In early 2010, it was decided that Kristian's progression in Rugby would be better nurtured with a switch to the hooker position, where he has flourished.

In 2013 Dacey took the further step to becoming a regular Blues matchday player as he was one of Phil Davies’ young players to face Europe’s premier Club Competition, the Heineken Cup.

Following on from his success he was rewarded with an international call up for the Welsh Squad for the 2015 6 Nations, however, he did not earn his first cap until a World Cup warm-up match vs Ireland in 2015.

Making his Cardiff Blues debut in 2010 and going to establish himself as a first-team regular and an international, Dacey re-signed with the region on a long-term deal in October 2016.

He was a third-choice hooker behind Owens and Scott Baldwin in Rob Howley’s squad for the autumn internationals but many believe he could climb the pecking order during the Six Nations.

The hooker has made some improvements to his game, becoming more of a carrying presence and his set-piece is improving.

To date, Dacey has represented Wales eight times and was included in the Wales squad for their two-Test summer tour.

In June 2017, he was a surprise inclusion into Warren Gatland's mid-week Lions squad as the head coach increased his squad size.

Dacey didn't make any appearances for the Lions but featured in all 4 of Wales end of year tests taking his test tally to 9.