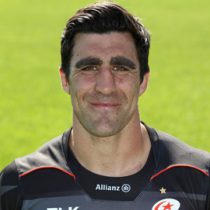 The impressive flank has been one of the mainstays of the Scottish back row since being named as the SPRA Player of the Season in 2007.

Since joining Saracens for the 2010/11 campaign he has been a top signing and has continued to excel for both the club and for Scotland.

He has played for Scotland at every level Under-18, U19, U21 at senior level and even for their sevens team.

His work rate is uncanny and he can make a big impact at the breakdown.

Brown has made 130 appearances for the club, the former Scotland captain brings a wealth of experience to the squad.

Kelly Brown will retire from professional rugby at the end of the season to take up a role as an academy coach at Saracens.

The inspirational loose-forward won 64 caps for Scotland, 14 as captain and since arriving from Glasgow Warriors in 2010, he has helped Saracens to three Aviva Premiership championships, a Champions Cup, Anglo-Welsh Cup and has made 154 appearances for the Men in Black.

In August 2020, the long-serving Saracen Kelly Brown has left the club to take up a coaching position at Glasgow Warriors. The brings an end a 10-year association with Saracens following the Scot’s transition into coaching upon his retirement from playing.