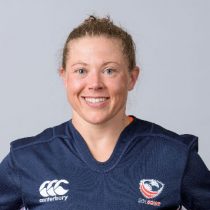 Katy Augustyn picked up rugby at age 22 after an ice hockey teammate invited her to a function on Easter Sunday and the band of rugby players in the room convinced her to play during her final year of college. Before then she played varsity softball for her high school in Antigo and four years of Division I Ice Hockey for Northwestern University. To cap off her athletic abilities, Augustyn has also completed half of an intense Iron Man.

In November of 2012, Augustyn earned her first cap with the U.S. Women's National Team 15s against Italy and has since been a regular feature on Women's Eagles tours. She's been to two Rugby World Cups including the most recent in 2017 where the United States finished a high fourth-place.

Augustyn owns a Bachelor's Degree in Criminal Justice, loves Snowboarding as well as cross-country skiing and was even in a bowling league as a kid.