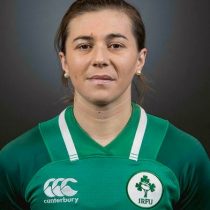 Katie has played with Ireland at in both Sevens and the 15-a-side game, having first picked up a rugby ball in secondary school.

Katie was one of the founding members of the women’s team in Wexford Wanderers and played her club rugby with Blackrock College RFC in Dublin.

In 2017, she was selected as part of Ireland's 2017 Women's Rugby World Cup squad. She played in the tournament and she scored a try in Ireland's seventh-place playoff against Wales at Ravenhill Stadium in Belfast, Northern Ireland.

Katie Fitzhenry has again been named for the Ireland squad ahead of the Women's 2020 Six Nations. She has had 7 appearances thus far and will look to add to this total.