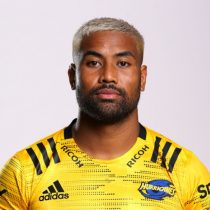 The immensely physical Julian Savea has had an action packed career to date.

All Blacks selection followed two years later in 2012, when on debut he became the first person to score a hat trick of tries against Ireland.

Powerfully built, Savea has serious bulk to go along with his blistering pace. Add in to the mix his ability to off load through the tackle, Savea is one of the most feared attackers in World Rugby.

After a great 2015 Super Rugby season with the Hurricanes having finished runners up to the Highlanders, Savea went on to win the RWC with the All Blacks.

In May 2016, he was one of the players dropped by the Hurricanes following a late night out and breaking the curfew but bounced back to start for his franchise and New Zealand in the June Tests.

Savea went into the 2017 Super Rugby season having made 88 appearances for the Hurricanes and had scored 39 tries.

He was included in the squad for the 2017 NZ Lions series making one appearance in the final match of the series.

In June 2018, the World Cup-winning All Black signed a two-year deal with French club Toulon.

Savea featured in all but one of the Hurricanes Super Rugby matches in 2018 taking his appearance tally to 120, scoring exactly 50 tries in the competition.

In May 2020, Savea announced he would leave Toulon and head back to New Zealand. He had made 41 matches in the red and black jersey in the Top 14 and the European Cup, with a total of 9 tries.

In August 2020, he rejoined Wellington for the 2020 Mitre 10 Cup season. Savea rejoined the Hurricanes in 2021 and by 19 April 2021, he became the second most capped Hurricanes player (along with midfield legends Conrad Smith and Ma’a Nonu) with 126 caps, behind only former captain TJ Perenara with 140 appearances.

He re-signed with the Hurricanes until the end of 2023.

IRB Junior Player of the Year 2010