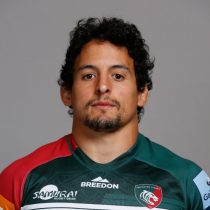 Juan Pablo Socino signed for Newcastle Falcons in the summer of 2014 on the back of an excellent season with Rotherham Titans which saw him named as RFU Championship Player of the Season and Golden Boot winner having scored 261 points for the Yorkshire side.

The Argentine made the best possible first impression on Kingston Park Stadium when he scored a try on his home debut during a pre-season friendly against his former club. Having previously played for Pro 12 side Dax and with Nottingham, Socino’s arrival in Newcastle represented his first venture into the top flight of English Rugby.

His first season of top flight rugby saw the blockbusting centre impress on 27 first team appearances, scoring 98 points in the process and making a name for himself not only amongst Falcons fans but across the league and beyond.

After representing his country at U19 and U20 levels as well as for Agentina’s A team the Jaguars, Socino collected his first senior international cap in his country’s historic test against the All Blacks in July 2015, going on to play for the Pumas in the 2015 Rugby World Cup before making 16 Premiership appearances in 2015-16.

In February 2018, Socino agreed to join Pro 14 side Edinburgh ahead of the 2017-18 season. He made the move to Spain to play before signing with Saracens in July 2020 ahead of the clubs Championship campaign. Socino has plenty of Championship knowledge having played over 100 games in the division for Rotherham Titans and Nottingham Rugby.