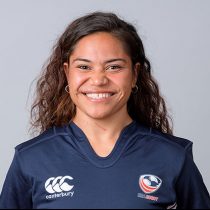 Joyce Taufa picked up rugby at age 17 after noticing a local club in her area practicing frequently. Taufa's dad was hesitant about rugby at first but after she snuck to a practice and he spoke with her coach, he came around and is one of her biggest supporters. Taufa also played soccer for 13 years and volleyball through high school.

As her skills in rugby continued to grow, she has earned Player of the Month and Player of the Tournament honors through her collegiate career at Lindenwood where she also named a Collegiate All-American in 2018. That same year, Taufa earned her first cap with the U.S. Women's National Team in November against the New Zealand Black Ferns.