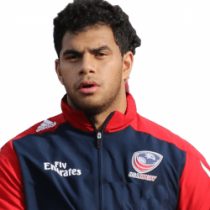 Joshua grew up in Fiji and moved to New Zealand to play both basketball and rugby at Rangitoto College, and Church College of New Zealand. In his senior year, Josh spent a season in Utah with United, helping them win their first National Championship beating Highland in 2010.
The following year Whippy joined BYU’s squad, but his freshman season was cut short with injury. After serving a 2-year service mission, Josh returned to BYU and was a stand out performer in many of their National Championships, receiving All-American honors.

Most recently, Josh has been a part of the Utah Select 7s team that won back to back National Club 7s titles and was named team MVP for the 2017 season. On the back of a stand out season, Josh went on tour with the U.S Men’s Select side to Uruguay and earned selection to the Eagles tour to Germany.