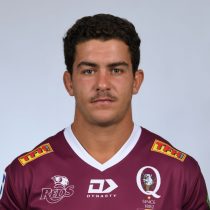 Growing up in Brisbane, Nasser spent most of his playing career packing down in the front row, and his engagement in countless scrums earned him selection within both the Queensland Schoolboys as well as the Queensland U20s in 2017.

Nasser tried his hand at NRC level with Brisbane City, before he was picked up for the Junior Wallabies 2018 Oceania and World Championship campaign.

The prop-turned-hooker enjoyed two seasons in the NRC with Brisbane City, before he was signed by the Reds on a Developing Squad contract in 2019.

He was elevated into Queensland’s Wider Training Squad for the 2020 season and went on to make his Super Rugby debut against the Lions in Johannesburg back in Round 2 before the COVID-19 competition cancellation.

He played six games for Queensland in 2020 that included scoring his maiden Super Rugby try when he crashed over against the Sunwolves during the Reds’ historic win at Suncorp Stadium.

In December 2020, he signed a two year extension with the Reds.