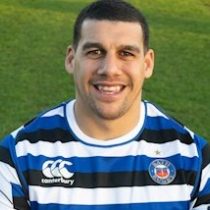 Born in Cornwall, England, to an English mother and Fijian father, Josh Matavesi attended the illustrious Truro College in his early years. A centre or wing, Matavesi has a typical Fijian style about him, combining hard running and ferocious defence with deft handling skills.

Matavesi, despite being called up to England Under-20 set up in 2008, decided to pledge his allegiances to Fiji and has gone on to represent both their U-20 side and full national outfit. Exeter Chiefs signed the youngster in 2009 and Matavesi spent three seasons here, with a stint at Racing Metro in between, before joining Worcester Warriors in the summer of 2012.

Matavesi has since gone on to join Ospreys and has been included in Fiji's 31 man squad for the 2015 RWC.

The centre was a member of the Ospreys side which defeated Newcastle Falcons in the European Challenge Cup last month.

He moved to Newcastle following the end of the 2017 season.

The Fijian international made 47 appearances during his time with the Falcons before he signed a deal with Bath in January 2020.