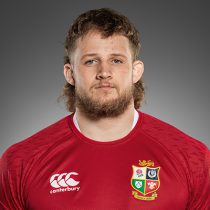 When his college application fell apart Jonny Hill was forced into an unexpected gap year – but it proved a vital step to an unlikely rugby career. Hill had tried his hand at rugby in his youth – he joined local club Luctonians at nine – but football soon took over.

However, at the end of his time at Ludlow School, Hill renewed his interest in the sport – just in time for what was to follow. His application for Worcester College fell through and he had to take a year out.

Determined to keep busy and encouraged by colts coach Simon Green-Price, Hill returned to Luctonians. Following some encouraging performances, the 17-year-old was encouraged by Green-Price to turn up to a walk-up trial at nearby Hartpury College. Hill was an instant hit and within a few months he was a first-team regular at the National League Two South side and on Gloucester’s radar.

He spent two seasons playing with Hartpury College and also had two run-outs for Gloucester in the LV= Cup. His form also brought him into the England Under-20s set-up, where he featured twice until an ankle injury brought his career to a halt.

With his contract at Kingsholm drawing to a close, the Ludlow-born youngster switched his attentions to Devon to further his career. Already known to forwards coach Rob Hunter, Hill quickly settled into his new surroundings at Sandy Park and made his first team debut in January 2016, coming off the bench against his former club. A hard-working and powerful second-rower, Hill has since become an integral part of the Exeter Chiefs set-up.


Hard-working around the field and an outstanding line-out forward, a bright future lies ahead for Hill, who during the summer was rewarded with his form last season by being called into Eddie Jones' England squad for their summer tour of South Africa.

Despite making the trip, Hill did not make his test debut for England but continued to perform for Exeter. By October 2020, Hill had made over 90 appearances for Exeter scoring over 20 tries. He had also helped the side win two Premiership titles and completed the Premiership and Champions Cup double in 2020.

His form was just too good to ignore and he was recalled to the England squad for the remainder of the rescheduled Six Nations in 2020 as well as the Autumn Nations Cup. His performances for his club saw international recognition follow, with Hill becoming an Eddie Jones favourite since playing the final game of England’s 2020 Six Nations triumph.

In May 2021, Jonny Hill was selected for the 2021 British and Irish Lions for the first time, the second row from the Exeter Chiefs has only 9 caps for England to date.