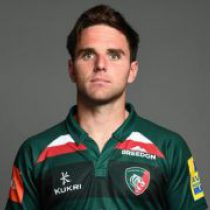 Able to play at full-back but primarily a fly-half, Ford came back in the top flight after spending the 2010-11 season with Northampton, making just five appearances before returning to former club Leeds.

Signed in the summer of 2013 from Leeds, Oldham-born Ford is from a rugby family, with father Mike a former Great Britain international rugby league player and ex-England defence coach in union, and brother George already an established Premiership player.

He decided to part ways with Sale Sharks in May 2016 and took his skills to Championship side Yorkshire Carnegie.

In May 2017, Ford teamed up with his brother George at Leicester Tigers this summer.

Having had previous Premiership experience with Sale Sharks and Northampton Saints, Ford's his spell at Carnegie proved invaluable in terms of experience.

In August 2019, he rejoined Yorkshire Carnegie in a player/coach role having made 85 appearances for the club, scoring 674 points.

It was confirmed in April 2020 that Ford would join Doncaster Knights as Backs Coach having agreed a two-year deal.