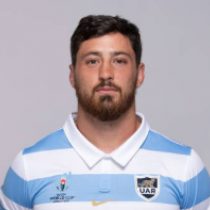 Making his debut against Uruguay back in 2012, Desio scored helping his side to victory. He added to his list by scoring twice in the very next game against Brazil. After a 2 year absence from the national team, he was reintroduced to the national team and made his comeback in May 2014.

At the time of writing this Desio had 32 tests for Los Pumas.

Desio heads into the 2018 Rugby Championship with 19 test caps.