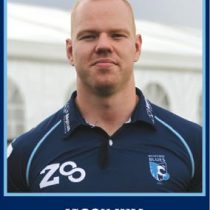 Jason Hill's rugby career has seen him play in Scotland and England. His exploits in Scotland saw him help Heriots Rugby Club to the Scottish treble, Premiership, BT Scottish cup and Charity Shield winners in the 2015/16 season.

Hill moves from Glasgow Warriors to Bedford Blues and his 6 foot 4 inch frame will add extra fire power from the side of the scrum.

In May 2017, Doncaster Knights announced the signing of number eight Hill from Bedford Blues.

The 27-year-old arrives following one season in Bedford where he made quite an impression with the home faithful picking up their Supporters Player of the Year award.

Hill is a powerful ball-carrier who can operate at both number 8 or blindside flanker, standing at 6ft 4in, weighing 108KG Jason will add even more physicality to the Knights impressive-looking new back row.