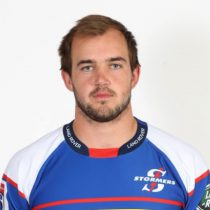 Having attended Hoërskool Waterkloof, Jan de Klerk moved to Cape Town where he linked up with the Western Province Rugby Union.

He represented the side at U21 and made appearances for Maties in the Varsity Cup between 2013 and 2014.

Shortly after the conclusion of the 2014 Varsity Cup, De Klerk joined the Western Province squad for the 2014 Vodacom Cup and made his debut against a Kenyan invitational side, Simba XV.

In 2015, he featured prominently for the Vodacom Cup side, which lead to him being named on the bench for the Stormers' final match of the round-robin stage of the 2015 Super Rugby season against the Sharks in Durban.

Since then de Klerk has been part of the Stormers Super Rugby squad as well as the Western Province Currie Cup side.

He made 7 appearances for the Stormers during the 2017 Super Rugby season.

The experienced lock made 12 appearances during the 2018 Super Rugby season before signing a deal with Canon Eagles for the 2018/19 Top League season where he will link up with former coach Alister Coetzee.