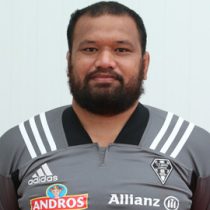 The powerful Samoan joined the Harlequins front row in 2009 since joining the team from Ponsonby in New Zealand.

He represented his country in the 2012 Pacific Nations Cup and is the younger brother of another big prop, Census Johnston. J

Johnston moved to Saracens in 2013 and then on to Wasps where due to injury did not represent the club in his short stay. Both parties decided that he could leave and he joined Worcester Warriors.