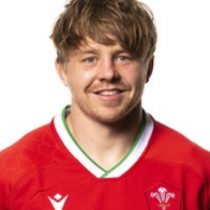 The flanker is the younger brother of Welsh and British & Irish Lions centre Jonathan Davies. A former Welsh u18 player, he has been key for Wales over the last couple of years, even taking over the reins of captain for a period in the 2012-2013 season.

His nickname is "Cubby", in reference to his brother's nickname, "Fox"; this refers to the Fox & Hounds pub their parents ran in Bancyfelin, the village where they grew up.

Davies made his Scarlets debut in an LV=Cup game against the Dragons in 2013.

In 23 appearances at the end of his first season with the Scarlets, the young flanker scored 4 tries and was at the top of the list as the most successful ball winner at the breakdown. He won 4 Man of the Matches in 16 appearances in a Scarlets jersey.

Davies was included in the squad that represented Great Britain Sevens in the 2016 Summer Olympics in Rio. He enjoyed plenty of game-time during the 2016-17 season, culminating in a man-of-the-match performance in the PRO12 final in Dublin.

After facing some disciplinary issues during a Champions Cup match in December of that year, Davies overcame that incident and did his talking on the rugby pitch. He lined out 23 times for the Scarlets, scoring three tries and led the league in turnovers won with a record-high of 33.


After being named in the PRO12 Team of the Tournament, Davies was rather surprisingly left out of the Wales summer tour squad. In November 2017, Davies extended his stay with the West Wales region before receiving a call-up to the Wales squad for the 2018 Six Nations Tournament.

He made his test debut in the starting line up against Italy and was included in Wales 2018 Summer tour squad, having helped Scarlets to the Pro14 final and Champions Cup semifinal. Davies won his first Wales cap against Italy in 2018 and delivered successive man-of-the-match performances on the tour of Argentina that year. He went on to be selected in Wales’ World Cup squad for Japan in 2019, named in the same squad as his older brother Jonathan.

In April 2022, Davies announced his retirement with immediate effect because of concussions.

He made 101 appearances in a Scarlets jersey, establishing himself as one of the leading opensides in the then PRO12 and PRO14. His final was his 11th Wales cap against Georgia at Parc y Scarlets in November 2020.