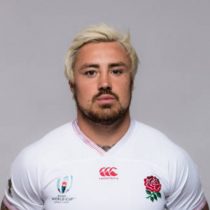 Born in Truro, England, Nowell is comfortable operating both at fullback and on the wing. A quality operator, Nowell has represented England at Under 18 and Under 20 level.

Originally a product of the Cornish Pirates youth system, Nowell was snapped up by emerging force Exeter Chiefs - making his Aviva Premiership debut in a 27-23 win against London Irish.

After a fine breakthrough season, the Cornishman won the Breakthrough Player of the Year award in 2013, a year after current England colleague Jonny May.

In the 2015 Rugby World Cup later that year, Nowell became the seventh England player to score a World Cup hat-trick in the 60-3 win against Uruguay

Test debut came against France in Paris in 2014 6 Nations, his first try was against Italy in Rome in round 5. Played every minute of last season's grand slam winning campaign and appeared in all three tests in Australia this summer.

On July 7th, 2016, the Chiefs announced Nowell as part of the England trio to have signed with the side on a three-year deal.

Nowell has impressed for Exeter since returning from injury in December. Nowell was a member of the side which whitewashed Australia on tour in the summer of 2016.

Nowell was set for his first Lions Tour after three years of Test match rugby which had seen him already play a major part in England's back-to-back RBS 6 Nations crowns in 2016 and 2017.

Nowell can play in multiple positions across the back line - making him one of Warren Gatland's most vital squad members for The British & Irish Lions Tour. He can safely operate at full-back and centre, having won 23 caps for England ahead of the 2018 Six Nations.

Ahead of the 2019 Six Nations, Nowell has had 21 previous 6 Nations appearances scoring 40 points.