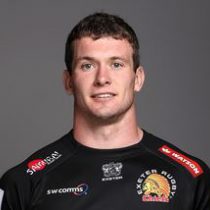 Hailing from Lisburn, Northern Ireland, Whitten graduated from Wallace High School before going on to attend the illustrious Queen's University in Belfast.

A centre by trade, Whitten is equally comfortable on the wing and poses a real threat going forward while more than solid in defence.

Having spent four seasons at his hometown club, Ulster, Whitten moved to Exeter Chiefs in 2012. Whitten has also represented Ireland on several occasions.

Whitten has made over 130 appearances in all competitions in the past five seasons, in the centre and on the wing, showing his versatility and durability for the Devonians.